Ever since video games have exploded on consoles, gamers have been obsessed with sports games and now we at The Tylt want you to pick the best one! In this matchup, we have the "NBA 2K" series versus "MLB The Show." The "NBA 2K" series has separated itself as the most in-depth NBA simulator on the market. "MLB The Show" has been around since 2006 and has become the go-to baseball game. Which game is better? 🏀 ⚾ 🎮

While there are many options to satisfy sports fans' video game cravings, four franchises have separated themselves from the rest. And now, The Tylt wants to know which franchise you think is the best. Vote for your favorite sports video game franchise by clicking on the bracket below! 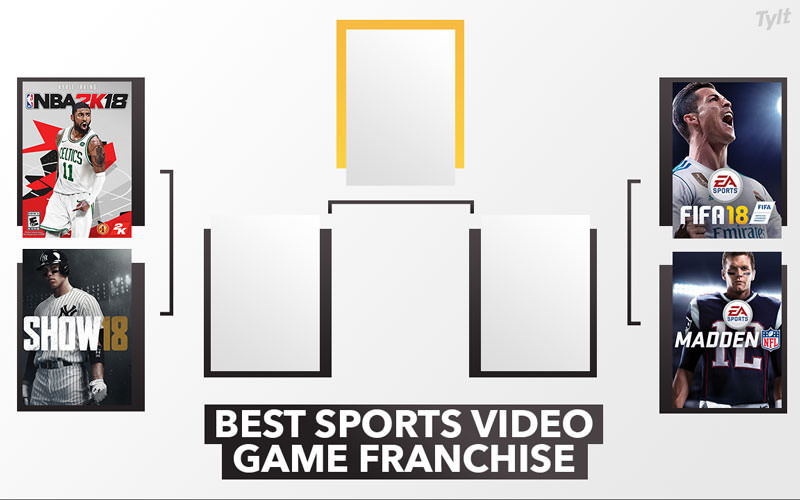 The "NBA 2K" series was far from the first basketball simulation franchise, but it established itself as the best with the best presentation and overall gameplay. That consistent quality is why "NBA 2K" is one of the best-selling NBA series of all time and is the official eSport basketball game. The NBA even created an NBA 2K league of their own complete with a draft attended by the league's commissioner.

Even players have attached themselves to the franchise, anxiously waiting for their rating in the game. That's when it becomes more than just a video game.

"MLB The Show" is relatively new to the scene, but the franchise has really established itself as the best MLB simulator on the market. Smooth graphics and intuitive gameplay have made the game popular amongst baseball fans. Baseball is a game of failure that leads to success. Perhaps no game captures that frustration like "MLB The Show."